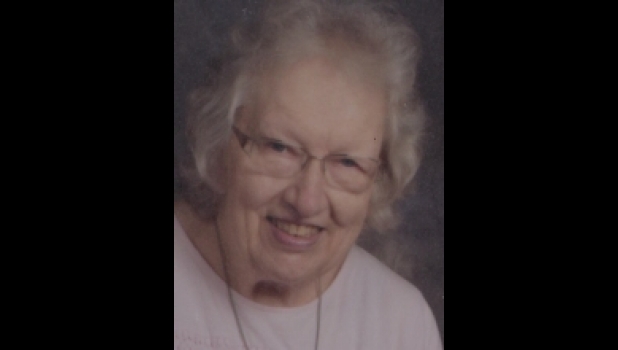 Harriet Louise Witte Neumann loving, wife, mother, grandmother and great grandmother was called to her heavenly home to be with the Lord and Savior Jesus on Monday, December 28, 2020 at the Carriage House. She was born on March 31, 1929 on the family farm in Rhodes Michigan, the second born, oldest daughter of Paul and Wilhelmina (Minnie) Witte. She was baptized and confirmed at Hope Lutheran Church and remained a lifelong Lutheran. As three younger sisters joined the family, she enjoyed assisting with caring for and “mothering” them. They grew up enjoying music in the home, learning to play the piano, and singing in harmony together for special occasions, even as adults. Their Christian faith was very important to the family, being very involved in their church in Rhodes, where Harriet learned to play the organ for services. During her high school years, she served as a nanny for a family in Pinconning. She graduated from Pinconning High School in 1947. She attended cosmetology school and worked in Bay City for several years after high school. On September 2, 1950 she married Alvin Neumann at St. John’s Lutheran Church in Pinconning, where they had met during a Walther League Christmas decorating party. They often joked about “meeting at the altar”. They settled on the Neumann family dairy farm, where they also raised beef cattle and cash crops. They eventually purchased the farm from his parents. Harriet loved hosting dinners and decorating cakes for special occasions. They were blessed with 5 children; Joy (Edward) Schellhas, Daniel (Sue) Neumann, Janine Bock, David Neumann and Julie Neumann, grandchildren; Rev. Aaron (Leeann) Schellhas, Heidi (Adam) Decker, Hannah (Bryce) Slavik, Benjamin (Kirsten) Neumann, Mary (Jesse Brodak) Neumann, Bradley Neumann, Dawn Bock, Douglas (Tiffany) Bock, Dana (Cassandra) Bock, Douglas Carlton, Nicholas Carlton, Ashley Carlton and James Brouwer and 24 great-grandchildren. She leaves behind her siblings: brother Robert (Barbara) Witte of East Lansing, sisters Bernice (G. Fred) Wait of Jackson, Kathleen (Walter) Hartley of Decatur, Alabama, Marilyn (Leonard) Leavens of Pinconning. Throughout her life, Harriet loved caring for children! While raising their own family, Al & Harriet opened their home to foster children, usually infants prior to adoption, for almost 10 years during the 1960’s and 70’s. She then worked as a nurse aid in the pediatric unit of Bay Medical Center. In the 1980’s they served as missionaries in Nigeria and Sierra Leone, West Africa with The Lutheran Church Missouri Synod, which was a life-long dream and desire of theirs and a blessing to many. Al served as the Financial Administrator in Sierra Leone as well as building a house for other missionaries and supervised several bridge-building projects to aid the native people. It was quite the adventure, which took them back to their childhoods, doing laundry with a ringer washer and lighting kerosene lamps during “brown-outs”. Harriet loved working with young mothers and their children there. Upon their return to the States, they joined Labors for Christ through LCMS, living in their travel trailer at sites throughout the country, working on building and remodeling projects at 32 churches over 16 years. Prior to going to Africa, they had sold most of the farmland, and later made their home in Houghton Lake, where they enjoyed retirement between projects. In 2009 they moved back to the “home” area of Bay City. Being a cancer survivor twice, Harriet unfortunately suffered from Alzheimer’s disease during the last years of her life, requiring additional care and supervision, and thus necessitating moves to progressive, assisted living facilities, as health failed for both of them. It was a blessing that Al and Harriet were still able to be together, and even celebrated 70 years of marriage on September 2, 2020.

Her beloved Alvin was called to his heavenly home to be with his Lord and Savior Jesus on November 8, 2020. Due to her inability to leave the nursing home, as well as pandemic restrictions, she was not able to attend his funeral with the immediate family. Though she surely has missed him, and realized the change in her life, she seemed at peace in her heart when told he is in heaven with Jesus. On December 28, 2020 Harriet was called to glory to be with her Lord and Savior Jesus, enjoying a blessed reunion with Alvin, and singing praises with the angels.