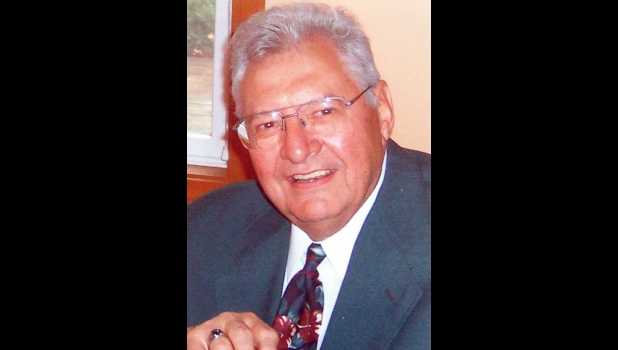 Jack, age 95, of Pinconning, Michigan, passed away peacefully on September 10, 2019, with his family at his side. He was born August 31, 1924, in Pinconning to the late Alphonse and Jennie (Potvin) Berthiaume. He married Lois Marie Proulx on September 2, 1946, at St. Michael Church in Pinconning, celebrating nearly 73 years of marriage. Jack was self-employed, building Jack’s Drive-In in 1955, and the Pinconning Laundromat and Dry Cleaners in 1960, keeping them until his retirement at age 75.
Jack is a WWII Veteran, serving with the U.S. Navy Seabees from 1943 to 1946 in the North Pacific and Aleutian Islands. He was a charter member and post commander of VFW Post 3753 and a longtime member of the Knights of Columbus.
Jack will be remembered for his beautiful singing in the St. Michael’s choir, as soloist for many weddings and funerals, and especially for his tenor solo of “O Holy Night” on Christmas Eve.

Jack enjoyed hunting and fishing, boating and occasional trips to the casino. He was an avid reader of historic, geographic and current events. He shared his many musical talents at gatherings with family and friends, playing piano, organ, accordion and harmonica, as well as singing. His home was filled with music.
Jack is survived by his children, Bruce (Carol) Berthiaume, Kenneth (Cathy) Berthiaume, Jennifer (Mike) McNellis, Kim Szostak, Paulette (Tim) Macon, and Dana Berthiaume, 12 grandchildren, 16 great-grandchildren, many nieces, nephews, extended family members and special friends. He was predeceased by his parents, parents-in-law, brothers Leo, Floyd, Robert and Charles, and sisters Olive Monson, Rita Jasura and Betty Wynne, and son-in law, Rick Miller. His wife, Lois, predeceased him on March 14, 2019.