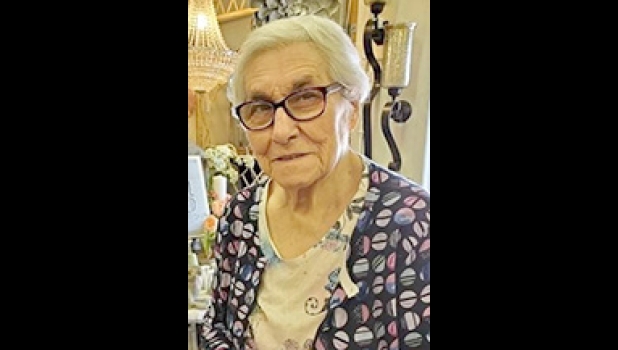 Mrs. Zola Mae (Bradley) Groh, age 91, went to her heavenly resting place on August 18, 2021, the last of the Bradley siblings. She was born in Pinconning on April 10, 1930, to the late Walter and Mary Bradley. She married Harvey Groh on May 19, 1951, and he preceded her in death on June 11, 2008. In her youth she worked at Purtell’s Restaurant, Northern Tube, and then as a school bus driver for over ten years in the Pinconning Area School District, where the students adored her.

Zola was a pillar of the Pinconning community as a founding member of the Pinconning Area Emergency Food Pantry. She dedicated 45 years of selfless service to those in need. In 1988, Harvey and Zola received the Vital Action Citizen Award, in 2006 she was named Pinconning Citizen of the Year, and received the Community Action Agency Award in 2013, and the United Way of Bay County Distinguished Service Award in 2015.

She was a Girl Scout Leader, a member of the Saginaw Valley Indian Association, the Methodist Women’s Organization, and the 1930 Birthday Club. Zola was a Godly woman who was a lifelong member of the Pinconning United Methodist Church. She was the Cheesetown Queen in 2016 which she was very proud of.

Zola was extraordinary at crocheting, quilting, macramé, and sewing. She loved dogs, especially St. Bernards and Boxers. She was an excellent Euchre partner and Bowler who was on leagues for many years. Zola was a sports enthusiast and enjoyed watching her grandkids play their various sports or watching the Tigers, Lions or Pistons whenever they were on TV. Summers were spent on her lawn tractor cutting grass, and spending time at the cabin in Skidway Lake with family and friends.

Left to cherish her memory are her loving daughters, Cookie and Ken Bumgarner, Shirley (Jim Trombley) Houle, and Karyl and Wayne Metevia. Her pride and joy were her grandkids who called her “Grammy”, “Grandma Groh” or “Gramcracker”, Kelly Brady of Midland, Shelly and Robby Bilow of Midland, Lisa and Rob Passinault of Howell, Duane (Jenny Friday) Bumgarner of Pinconning, Jae and Ronnie Bumgarner of Lake Wales, FL, Carrie and Mike Gerow of Frankfort, KY, and Val and Mike Bishop of Auburn. She is also survived by 19 great-grandchildren.

She was predeceased by Harvey, her husband of 57 years and the love of her life; daughter and son-in-law, Robin and Rooster Coleman; grandson, Jason Houle; siblings, Dorothy Cramer, Geraldine Meier, Bernard Bradley and Gerald “Sonny” Bradley.

Per Zola’s wishes cremation has taken place. A Celebration of Life will be held at 12 P.M., Saturday, September 4, 2021, at Pinconning United Methodist Church, 314 Whyte Street, Pinconning Michigan. Friends may visit at church from 11:00 a.m. until time of service. Inurnment will take place following the service at Pinconning Township Cemetery. A luncheon will follow in the church Fellowship Hall.

The family would like to sincerely thank Horizon’s Senior Living Center in Standish for the wonderful care given while Zola resided there. In lieu of flowers, those planning an expression of sympathy are asked to consider memorial contributions to the Wishes of the Family. To sign an online guestbook, visit www.cremationsocietymidmi.com

Arrangements made with Cremation Society of Mid Michigan.